The health and wellbeing of our visitors and volunteers are our highest priority.

Thank you for your support, we look forward to welcoming you back when we reopen.

Events at the Museum

To commemorate the 75th anniversary of the end of the Second World War this year's Summer Exhibition 'Soldiering On' will reflect village life in WWII and will honour those who served in the conflict.

A smaller exhibition will tell the story  of the legendary Porlock Vale Riding School and Captain Tony Collings.  Captain. Collings was instrumental in founding the Horse of the Year Show and helped  found the Badminton Horse Trials, riding in the first event and winning in 1950.

Annual Coffee Morning
Homemade cakes, a good opportunity to have a chat and to see what is new at the museum.
Raffle.

Military historian Ron Biddle will recount the events of June 1943 when a Halifax heavy bomber crashed into the woods above Porlock Weir. Despite the bravery of three local workmen who rushed to the scene, four crew died; two men survived, including the pilot. 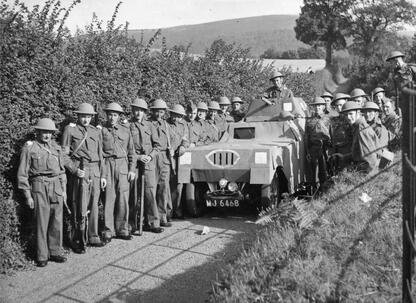 Those Who Served – WW2

Journalist and historian Jeff Cox, military historian Ron Biddle and the Dovery Players present an evening’s tribute to those local servicemen and women who served and died in the Second World War. They will also relate the full wartime effort made at home by those living in Porlock, Luccombe and Selworthy.