Local life and history are portrayed through artefacts, costume, photographs, ceramics, tools, and domestic items.
Dovery Manor Museum actively collects items of local history. We are always pleased to hear from local people or those with past contacts in Porlock who can supply information and contacts to extend our records.
Second World War Project

The Museum needs your help!
On Friday May 8th 2020, the nation will be commemorating  the 75th anniversary of VE Day, the end of the Second World War in Europe.
Dovery Manor Museum will be making its contribution, with exhibitions and events telling of the role of the men and women from our three parishes in the war.

Fifteen men from Porlock died in the Second World War, eight from Selworthy and four from Luccombe*. The Museum is researching the full stories of each of these men, their family background, their wartime service and where they are now commemorated.

To do this, the Museum seeks the help of anyone with information, materials or photos of the men from our three parishes who died. Research into the Second World War is hampered, as there are legal restrictions placed on public access to personal archives less than 100 years old.
So the Museum needs your help: we are keen to hear from anyone with information on any of these men to help us present the fullest possible tribute.

We also want to hear about the wartime exploits of those who survived, the men who went to war and the women who performed vital tasks in support at home.
There are fascinating stories to be told of the impact of the Second World War here in Porlock and the Vale, such as
- the activities of American and Allied troops billeted in the district for intensive training,
- the role of the Observer Corps and of the Home Guard, patrolling the moors and beaches,
- housing the evacuees seeking safety from England’s urban centres,
- the planes that crashed here, on the marshes and hillsides.

The Museum is also keen to hear from anyone who has information, material or photographs relating to any of these local wartime activities, or any other material related to the Second World War.

The museum is grateful to One Stop for their generous grant towards this project. 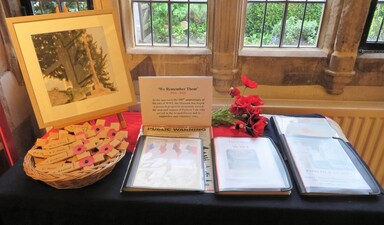 Lodged at the Dovery Manor Museum are three impressive new volumes, the result of extensive new research and the work done by the Museum in commemorating the district’s contribution to the war effort.

The first is a comprehensive Register of Those Who Served. This records the name, rank, regiment and often the home addresses, of over 350 men and women who served in the war from the local parishes – from Porlock, Luccombe, Selworthy, Culbone, Oare and Stoke Pero. It’s the first time such detailed research has been attempted, honouring the sacrifices made by so many from this district.

The second volume is a Roll of Honour. This pays tribute to all those men from Porlock and the Vale who died in the First World War. It tells in some detail the stories of each man whose name is carved on the three parish War Memorials - at Porlock, Luccombe, and Selworthy.

These two volumes do not claim to be the final story. There may well be errors or omissions. And that is where you can help. Do visit the Museum and look at these volumes; and please tell us if you have information that can improve this tribute to the men and women from Porlock and the Vale who served their country in time of war. 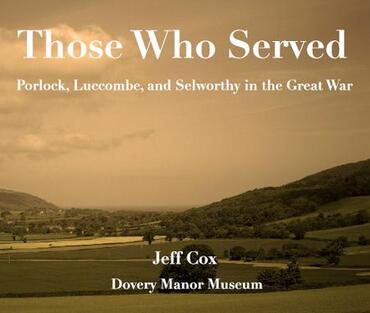 Those Who Served. Porlock, Luccombe, and Selworthy in The Great War

The third volume, Those Who Served, tells of the impact of the war on these residents of the district. It relates, year by yearthe experiences of some of the local men fighting in the water-logged trenches of France and Flanders, and in the rocky hills of the Holy Land; those involved in naval engagements in the North Sea; and those who served in the broiling heat and dust of India.

Copies available in the museum. £25

We are grateful to One Stop Carriers for Causes for funding this project and to W H Smith for a grant of £100 towards the production of the book 'Those Who Served'. 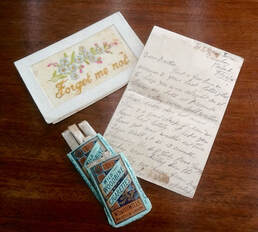 From Your Loving Sister

On July 4, 1916 Emmie Hawkins wrote to her brother Will.  Lance Corporal William Hawkins was serving in France.  WWI was in its second year and the letter tells of a village already depleted of young men and the hope that their youngest brother, 'little Fred',  would not be called to serve.  Emmie wrote of those who had returned injured and the loss of 'poor George Stuckey'.   She closed hoping that Will would be home soon, enclosed 'a smoke', and added ten kisses.

After the ball
This silk taffeta and chiffon ball gown (C. 1890) was donated, anonymously, to the museum. Along with the gown and hooped petticoat were a pair of long and once white kid gloves. Folded and tucked into the finger of one was note from a would-be suitor urging her to meet him 'in Betty's orchard after the ball'. 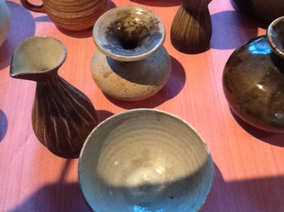 This collection is the work of Waistel Cooper (1921-2003) the potter who worked at Culbone for 27 years and gained great respect for his concern with form and texture.